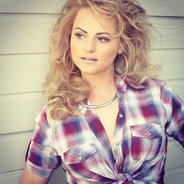 Yuliya Vladimirovna Zinovieva (born May 26, 1982) is a Russian American vocalist, songwriter, actress, producer, and businesswoman.[1] She achieved popularity in the music world in the early 2000s by combining her classical training with mainstream pop music and charted on the Billboard Dance/Club Songs Chart in 2013 at number 49 with her song '"Don't Take Your Love Away"'.[2] Yulianna has been credited with coining the music term Popra or the combination of pop and opera.[3]

Born in Almaty, Kazakhstan in the former Soviet Union, Yulianna was trained as a vocalist and violinist and began writing poems and lyrics in high school where she won numerous awards for her musical talents.[4] She grew up in Santa Barbara, California and attended the California Institute for the Artsearning a master’s degree before moving permanently to Los Angeles, California to pursue a career in entertainment. And after being inspired working with her musical influences Peter Rafelson (Jackson Browne, Elton John), Dave Aude (Coldplay, U2), and Carmen Rizzo (Seal), Yulianna left Calarts to compose and produce her own original works.[5]

By utilizing extensive musical training and her resource of well-known industry professionals, Yulianna was able to garner rapid success in the pop-opera domain throughout the 2010s.

In 2009, Yulianna met with Grammy Award winning music producer Robin Nixon, together, the two went on to produce her first album entitled "La-La-Land".[11]

In 2012, she produced her first single, Race Car, with help from Robin Nixon. Race Car was generally well received by the critics and the music video, directed by Academy Award winning director Waleed Moursi, won Best Music Video at the 2012 Colorado Film Festival.[12]

Yulianna scored her first hit with ‘’Forgiveness’’, a collaboration between herself and Grammy winning producer, Walter Afanasieff, renowned for his work with Mariah Carey and Christina Aguilera and lyricist Lindy Robbins who is known for writing with Faith Hilland Selena Gomez.[13] Forgiveness was highly regarded for its display of Yulianna’s operatic and competent vocal ability.[14] It also was the first to showcase for her talents as a burgeoning songwriter. The song and coinciding video garnered an incredible buzz with over a million views on YouTube.[15] It was submitted for Best Instrumental Arrangement with Accompany Vocals for the 55th Annual Grammy Awards in 2012.[16] The video won several awards including Best Music Video at both the Naperville Film Festival (NIFF) and the Las Vegas Film Festival (LVFF);[17] while the single itself has seen radio play internationally on major FM stations such as Los Angeles’ KDAY and Las Vegas’ KCEP as well as London’s ChoiceFM.

In 2013, Yulianna released her first full-length dance album, "Californ-i-a," written and produced by herself and writer/producer RAS known for The Wanted, Jordin Sparks and Big Time Rush and producer Spencer Nezey.[18]

Grammy Nominated guitarist John Brown was added to the album, creating backdrop to her operatic, powerhouse vocals. According to Yulianna, the album possesses influences from every genre, from " the hard hitting, club-banging beats of Rihanna" to the "self-affirming, synth-infused pop of Lady Gaga." [19]

Californ-i-a was well received by critics and garnered international distribution earning Yulianna a Top 50 Billboard Chart credit for the single, "Dont Take Your Love Away.".[20]

Her most recent album, "Popra Soldier" was released in 2014 and acclaimed by audiences.[21] Two time Grammy Award Winning musician Ruslan Sirota is the featured piano player on the album.[22]

Joey Fargo  over 3 years ago

I hear that Yulia is a talented gifted singer - Wish her music was uploaded on DigiRAMP!

Puss n Boots  over 3 years ago

Would so love to hear your sweet voice. Looking lovely as you wanna.